Japan: Reflection on peace by Archbishop of Nagasaki 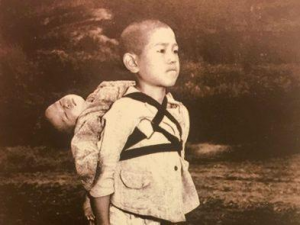 At the end of last year, Pope Francis, struck by a picture of a boy standing at a cremation site, gave instructions that copies with his signature and the words ‘The Fruit of War’ should be widely distributed. The photo was taken by a US military cameraman one month after the bombing of Nagasaki, and it shows the misfortune, suffering, emptiness and resentment caused by war. By issuing the card the pope conveyed his strong conviction that we must never resort to war.

The past century witnessed the establishment of the League of Nations, the enactment of the 1928 Kellogg-Briand Pact that pledged nations to “condemn recourse to war for the solution of international controversies and renounce it as an instrument of national policy in their relations with one another,” the Second World War and the subsequent establishment of the United Nations, the Cold War and the collapse of the Communist bloc. In addition, it is fortunate that about 100 colonies of Britain, France, the Soviet Union, the United States and others have achieved their independence. Overall, it can be said that peace and the protection of human rights have been a universal desire.

Even so, serious regional conflicts, terrorism, the threat of nuclear weapons, refugee problems, various forms of discrimination, economic disparities and friction continue to threaten peoples’ peace around the world.

In July of last year, the United Nations General Assembly adopted the Treaty on the Prohibition of Nuclear Weapons with a majority of 122 countries and regions, but as of July 7 of this year, only 11 countries including the Vatican have ratified this international treaty calling for the complete abolition and eradication of nuclear weapons.

The idea that nuclear weapons are necessary for deterrence is strong. However, the possession of nuclear weapons is, rather, responsible for the arms race that inevitably leads to economic dependence on the arms industry and military demand, and shapes politics.

Deterrence is an attempt to maintain peace by means of arms, but by further increasing such factors of conflict as hostility, mutual distrust and conflicts of interests, it gradually breaks down the foundations of reconciliation, peace and mutual understanding. The urgent problems the world faces (environment, immigrants, refugees, wealth disparities and poverty) are born out of the theory of deterrence and its unbalanced economic institutions.

In addition, for the sake of anti-terrorism and security, control of speech has been carried out. Hate speech that encourages cyberattacks on the Internet and discrimination is rampant. Various problems caused by smartphone addiction have also arisen.
Media should not create negative stereotypes about specific countries, ethnic groups, religions and such, but should fairly provide accurate information and encourage mutual understanding.

We are taught that humanity has dignity by virtue of being created in the image of God and that therefore all human beings are a family. In addition, we know that God has given us a mission to build solidarity through reconciliation and mutual love. Based on that conviction, let us try to use information to tell the truth with love, to strengthen each other and create bonds. Let us always keep a close eye on the situation in the world, especially in East Asia, and pray that politicians continue patient dialogue to pursue mutual benefits and peace, rather than their own narrow interests.

This entry was posted in Japan Scene, Superior's Desk and tagged Peace. Bookmark the permalink.