“The Devil is Smiling”. Where are our Shepherds?

Abortion’s “slippery slope” continues to expand throughout the world and the crack in the wall gets bigger. The most shocking news took place recently in the United States. The headlines read, “NY governor signs sweeping new abortion law that allows abortions after 24 weeks”. This law, the so-called Reproductive Health Act, permits abortions after 24 weeks and allows abortions at any point in a pregnancy, including the day before the child is born.

What’s really surprising is that the bill passed the New York state Senate by a 38-24 vote and the state Assembly by a vote of 92-47. Why the surprise? Because New Yorkers are very religious people when compared to most Americans. Catholics represent 40% of New York’s population, Protestants 30%. Smaller Jewish and Muslim minorities comprise 8.5 and 3.5% respectively. Only 13% claim they have no religion. The surprising factor is that 70% of these are Christians and profess the same God. How is it possible for so many to turn against their God and vote for candidates who support the annihilation of God’s most sacred unborn creations. Can you imagine it – an innocent baby, just hours from being naturally born, murdered in cold blood? It’s disgusting.

Before this law was enacted, the Centers for Disease Control and Prevention in 2013 already showed that New York City had a high rate of abortions – 59.8 percent of its live birth rate. This means, as pointed out in December 2017 by NewsBusters, that one out of every three babies ends up being killed. 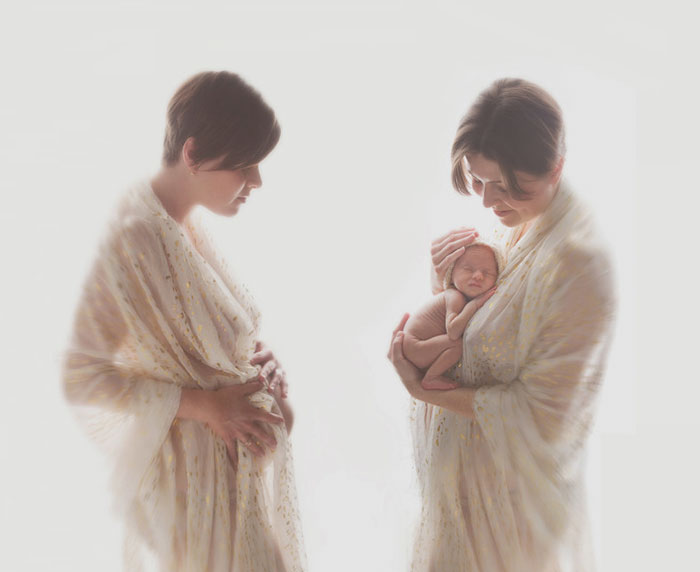 This photo shows maternity before and after giving birth. It’s a miraculous and beautiful journey involving God, mother and child. To select and intentionally kill the child before birth is a crime against humanity. It is a direct crime against God who gives life to the child at the very beginning of its creation. As the picture clearly shows one day before and one day after, the child is the same, only the location is different.

The Bible tells us that children have a special place in God’s heart and anyone who harms a child is inviting God’s wrath upon himself. Pregnancy is a beautiful thing. It’s the journey of bringing a tiny new person into the world and none of us would be here if it weren’t for it.

The Roman Catholic Church has consistently condemned abortion – the direct taking of the life of the unborn child. Catholics believe that all life is sacred from its very beginning until its natural death, and the killing of innocent human life, whether born or unborn, is morally wrong. The Church teaches, “Human life is sacred because from its beginning it involves the creative action of God and it remains forever in a special relationship with the Creator, who is its sole end. … no one can under any circumstance claim for himself the right directly to destroy an innocent human being” (“Donum Vitae,” 5). (“Catholic Catechism” abortion)

I wonder if our Cardinal agrees with Cuomo when he publicly states that he is a Catholic and that he is a member in good standing of the Catholic Church. Is this our Catholic Church? No wonder the Catholics and Christians in New York (and throughout the world) are confused. The devil smiles and Cardinal Dolan refuses to excommunicate. “Not an Appropriate Response,” he says. It’s time for the Archbishop to stop playing politics and become a Shepherd to his flock which includes unborn children. I wonder if our Archbishop has any clue of what is happening, what this Bill will actually do:

1. allow abortions up to the moment of Birth
2. allow no protections for babies BORN ALIVE after botched abortions
3. allow non-doctors to kill babies in abortions
4. allow a baby not to be considered a human being under the law until birth
5. prohibit any pro-life laws

Last year Cuomo made it very clear that he wants New York to be the abortion capital of the world. Now, the abortion extremist has gone one step further by stating at the Capitol Pressroom that pro-lifers are not welcome to live in New York. That a politician can say that certain people shouldn’t even be able to live in the State of New York, simply for believing in the sanctity of life, is truly shocking. Shows signs of another Hitler pointing his finger at an unwanted class of people.

Andrew Cuomo embraces abortion rights, celebrates the victory, and rejects the fundamental values of his faith without blinking an eye. His record shows him to be an evil man. Catholics worldwide should definitely demand Cuomo’s excommunication from the Catholic Church immediately, along with any other Catholic politician who supports and votes for laws which intentionally kill unborn babies. It’s time for Catholics to stand up and be heard for the sake of children both before and after birth. To do otherwise is to deny God. (Matt 12: 30) “Anyone who is not with me is against me.”

In the Catholic Catechism , The Holy Spirit teaches us very clearly about life and abortion:

2270 Human life must be respected and protected absolutely from the moment of conception. From the first moment of his existence, a human being must be recognized as having the rights of a person — among which is the inviolable right of every innocent being to life. “Before I formed you in the womb I knew you, and before you were born I consecrated you.”

2271 Since the first century the Church has affirmed the moral evil of every procured abortion. This teaching has not changed and remains unchangeable. Direct abortion, that is to say, abortion willed either as an end or a means, is gravely contrary to the moral law: “You shall not kill the embryo by abortion and shall not cause the newborn to perish.” God, the Lord of life, has entrusted to men the noble mission of safeguarding life, and men must carry it out in a manner worthy of themselves. Life must be protected: abortion and infanticide are abominable crimes.

2272 Formal co-operation in an abortion constitutes a grave offence. The Church attaches the canonical penalty of excommunication to this crime against human life. ‘A person who procures a completed abortion incurs excommunication’… The Church does not thereby intend to restrict the scope of mercy. Rather, she makes clear the gravity of the crime committed, the irreparable harm done to the innocent who is put to death, as well as to the parents and the whole of society.

2273 The inalienable right to life of every innocent human individual is a constitutive element of a civil society and its legislation:

“The inalienable rights of the person must be recognized and respected by civil society and the political authority. These human rights depend neither on single individuals nor on parents; nor do they represent a concession made by society and the state; they belong to human nature and are inherent in the person by virtue of the creative act from which the person took his origin. Among such fundamental rights one should mention in this regard every human being’s right to life and physical integrity from the moment of conception until death.”

‘The moment a positive law deprives a category of human beings of the protection which civil legislation ought to accord them, the state is denying the equality of all before the law. When the state does not place its power at the service of the rights of each citizen, and in particular of the more vulnerable, the very foundations of a state based on law are undermined. . . As a consequence of the respect and protection which must be ensured for the unborn child from the moment of conception, the law must provide appropriate penal sanctions for every deliberate violation of the child’s rights.’

2274 Since it must be treated from conception as a person, the embryo must be defended in its integrity, cared for, and healed…, like any other human being. …..

(And in closing, a few voices crying out throughout the world for Catholic leadership:)

This entry was posted in Right To Life. Bookmark the permalink.